A promise for the future. A threat from the past. Can Bel find happiness?

Back in Sydney after her aunt’s death, sixty-five-year-old Bel Davison is making plans to sell up her home and business and return to Scotland where she has promised to spend the rest of her life with the enigmatic Scotsman with whom she’s found love.

But the reappearance of her ex-husband combined with other unexpected drawbacks turns her life into chaos, leading her to have doubts about the wisdom of her promise.

In Scotland, Matt Reid has no such doubts, and although facing challenges of his own, he longs for Bel’s return.

But when an unexpected turn of events leads him to question Bel’s sincerity, Matt decides to take a drastic step–the result of which he could never have foreseen.

Can this midlife couple find happiness in the face of the challenges life has thrown at them?

A sequel to The Good Sister, Isobel’s Promise continues the story of Bel and Matt, which began in Scotland.

If you enjoy reading about strong women who have learned to love and love in later life, you’ll love Maggie Christensen’s books.

Isobel’s Promise is the first book I read in 2020.  I started it on the evening of January 1st and finished it the next morning.  This is one of those “can’t put down” books.  I was hooked on the first page. Written beautifully with careful thought to the layout of the story, I soon fell in love with Matt and Isobel, but especially Isobel.  She is a strong woman who found the love of her life at the age of 65.  She reminds me of my grandmother who seldom had a bad word for anyone and always had an ear to listen to others.

Matt lives in Scotland, but Isobel’s home for most of her life is in Australia.  She left Scotland as a young woman and wonders if she could return to live there permanently.  Her business and the house she loves are in Sidney, Australia. Additionally, there is the matter of Matt’s daughter who is convinced Isobel is out to replace her deceased mother.  Can Isobel come between Matt and his daughter and her children?  There is so much for Isobel to sort out.

This is the first book I’ve read by Maggie Christensen, and it won’t be the last.  Her characters are engaging, and the story has a few unexpected turns. If you like books about strong women, romance, enjoy coming across a surprise or two as you read, you will love Isobel’s Promise.

There is no reason not to give Isobel’s Promise 5 stars. 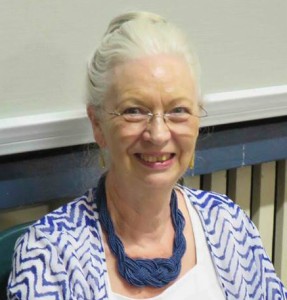 After a career in education, Maggie Christensen began writing contemporary women’s fiction portraying mature women facing life-changing situations. Her travels inspire her writing, be it her frequent visits to family in Oregon, USA or her home on Queensland’s beautiful Sunshine Coast. Maggie writes of mature heroines coming to terms with changes in their lives and the heroes worthy of them.
From her native Glasgow, Scotland, Maggie was lured by the call ‘Come and teach in the sun’ to Australia, where she worked as a primary school teacher, university lecturer and in educational management. Now living with her husband of thirty years on Queensland’s Sunshine Coast, she loves walking on the deserted beach in the early mornings and having coffee by the river on weekends. Her days are spent surrounded by books, either reading or writing them – her idea of heaven!
She continues her love of books as a volunteer with her local library where she selects and delivers books to the housebound.
A member of Queensland Writer’s Centre, RWA, ALLi, and a local critique group, Maggie enjoys meeting her readers at book signings and library talks. In 2014 she self-published Band of Gold and The Sand Dollar, Book One in the Oregon Coast Series, in 2015, The Dreamcatcher, Book Two in the Oregon Coast Series and Broken Threads, and in 2016, Madeline House, book Three in the Oregon Coast Series

The photos, author bio, and book blurb used here are from Goodreads.