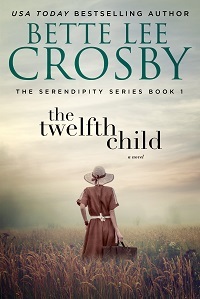 An uplifting tale of trust, love, and friendship from a USA Today Bestselling Author of Women’s Fiction…

Papa wasn’t someone who’d flat out kill a person, but he sure knew how to destroy a woman from the inside…a slice of spirit, a piece of pride, a chunk of heart, until one day there’s nothing left but a walking around shell to do the cooking and laundry…thus begins the story of Abigail Anne Lannigan, a willful daughter determined to overcome the past.

Leaving the Shenandoah Valley of the early 1900’s behind, Abigail finds a way to survive in a world of joblessness and speakeasies. Now, at the tail end of her years, her best friend is accused of embezzling one million dollars and Abigail is helpless to save her. She knows the truth of what happened, but will never have the chance to tell.

Reminiscent of Fannie Flagg’s “Fried Green Tomatoes” the May-December friendship of these two unforgettable women is sure to settle in the soft spot of your heart.

The Twelfth Child, told in the timeless tradition of Southern Fiction, is a novel rich with emotion, humor, and tenderness. A Historical Mystery set in the 20th Century, this is a story of love, friendship and one woman’s struggle to survive America’s Great Depression.

Growing up with a father who preferred her twin brother, Will, Abigail Anne Lannigan was continuously trying to win her father’s love, but he had a heart of stone.  After Abigail’s mother passed away, life became increasingly hard for Abigail.  Her father wanted her to quit school and take care of the household chores, and marry someone of his choosing at a young age.  Abigail Anne had bigger plans and, with the help of her teacher, found her way to Richmond, Virginia.  The woman she lived with and worked for passed away and she was expelled from the woman’s home by the probate court.  Life grew tougher as she tried to eek out a living as a dancer at a speakeasy during the Depression years.  A tough, courageous, and determined woman, Abigail Anne faced many trials and tribulations during her lifetime and became successful in her own right.

When Destiny Fairchild, with her heart of gold, moved in across the street the two formed an unlikely friendship, given their age differences. It is their friendship that gives heart to this story.

The ups and downs of Abigail Ann’s and Destiny’s story will keep you turning the pages.  Their saga is well fleshed out with real-to-life situations.  Their characters are undeniably plausible and equally loveable.  Another character is Elliott Emerson who is nothing but bad news.  I disliked him from the moment he appeared.  He personifies greed, dishonesty, and all else on the ugly side of human nature.

As with all the books by Crosby, I thoroughly enjoyed THE TWELFTH CHILD.  Her style of weaving warmth, a bit of cozy mystery, and a touch of fantasy into everything she writes makes Bette Lee Crosby one of my favorite authors.  As I say after reading each of her books, this is my favorite. But the truth is, they are all so good it is impossible to choose one book over another.  Reading Crosby’s books, one gets the sense that you are sitting in the room while the author tells the story.  She writes with a soothing Southern voice that brings a sense of realism to her fiction.

Samantha from Reader’s Favorite raves, “Crosby writes the type of book you can’t stop thinking about long after you put it down.”

“Storytelling is in my blood,” Crosby laughingly admits, “My mom was not a writer, but she was a captivating storyteller, so I find myself using bits and pieces of her voice in most everything I write.”

It is the wit and wisdom of that Southern Mama Crosby brings to her works of fiction; the result is a delightful blend of humor, mystery, and romance along with a cast of quirky charters who will steal your heart away. Her work was first recognized in 2006 when she received The National League of American Pen Women Award for a then unpublished manuscript. She has since gone on to win nineteen awards for her work; these include The Royal Palm Literary Award, the FPA President’s Book Award Gold Medal, Reader’s Favorite Award Gold Medal, and the Reviewer’s Choice Award.

33 thoughts on “The Twelfth Child”

My escape from reality reading books